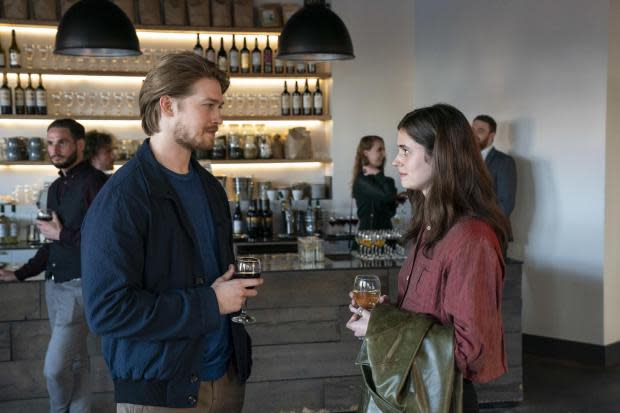 Ahead of the anticipated new series based on Sally Rooney’s debut novel, Rachael Davis chats to stars Alison Oliver and Joe Alwyn

In spring of 2020, starved of human contact during those ominous first weeks of lockdown, the hearts of viewers up and down the country were captured by the steamy and emotional BBC television adaptation of Sally Rooney’s award-winning novel Normal People.

The romantic drama series certainly left a legacy, kickstarting the careers of stars Daisy Edgar-Jones and Paul Mescal and delivering the best week ever for BBC Three, receiving 16.2 million requests in its first week.

It’s perhaps no surprise, then, that the creators of Normal People have mined Sally Rooney’s back catalog for more.

2022’s Conversations With Friends, adapted from Rooney’s 2017 debut novel of the same name, follows Dublin student Frances and her best friend/ex-girlfriend Bobbi as they find themselves entwined in a complicated web of love affairs with a married couple.

They catch the eye of Melissa, played by Sex Education’s Jemima Kirke, a successful writer in her thirties, at one of their Dublin spoken word poetry performances. The students begin to spend a lot of time with Melissa and her husband Ella Nick, The Favorite and Mary Queen Of Scots ‘Joe Alwyn.

Melissa and Bobbi openly flirt with one another, but Nick and Frances’ romantic and sexual affair is kept secret despite its intensity. It’s not long before the secrecy begins to test the bond between Frances and Bobbi and forces Frances to confront a personal and moral identity crisis.

The main message of the story, Oliver says, is one of the freedom and fragility of love.

“I think what I took away from the story, and what I hope people will take away is: you can’t control who you love or how many people you love, you can’t control how it’s going to work out or how you ‘re going to feel about it,” she says.

“You can only just love people and hope for the best.”

Oliver praises the rich source material – Sally Rooney’s novel exploring Frances’ “whole interior life during that period of time” – for how naturally she was able to slip into the leading role.

“She’s such a fascinating character, she’s so complicated, there are so many different elements to her,” Oliver says.

“When you read the book, she’s written so distinctly and honestly that I had such a strong idea of ​​her in my head when I came to audition and then came to play her.

“The way that this is made is in a very intimate and sensitive way, and there’s so much space for quieter moments and quieter performances, it really gives you the space to breathe with the character.”

Similarly Alwyn, also a huge fan of Rooney’s work, says he felt a kinship with his character, 32-year-old actor Nick.

“There’s a lot that’s different, but there are similarities,” he says.

“Some of the things that he’s struggled with or moments of doubt, periods of being low, I can kind of relate to, but also periods of being happy. There’s an essence to him that I’m similar with, as much as there is circumstantially quite a lot different.

“That’s a very Nick way of answering – quite evasive, cryptic and guarded.”

Compared to Normal People’s love story narrative, Conversations With Friends is far more abstract. It’s a complex coming-of-age drama, more about character development and interpersonal relationships than conventional plot. As Kirke, who plays Melissa in the TV adaptation, puts it: “Aside from an affair, nothing really happens.”

Instead, the nuanced story is led by quiet moments: fleeting glances, the way objects are passed between characters, the electricity of an illicit brush of fingers, a whispering intake of breath.

Rooney is often lauded for this minimalist method of storytelling in her prose, but it’s a tricky job to translate this to screen for writers, directors and actors.

“The team that made Normal People really broke new ground in the world of television in creating something that was more low-key than you might expect from a TV show, that sort of allowed you to sit in moments with the characters,” says Leanne Welham, who directed the program alongside Lenny Abrahamson.

“There’s a desire for that, for audiences to have an opportunity to not just be sort of hit over the head with plot on a story, but to actually have those quieter moments and to construct episodes around moments of nuance.

“Moments that you wouldn’t think of as dramatic, but actually in the context of the story and the series, do actually feel incredibly tense. As a director it’s really amazing to do that.”

This nuance and subtlety is what drew Oliver to the role, too. She says she had read Rooney’s work before, finding it “so intimate and sensitive and detailed, but also fearless and powerful”, and she was enchanted by the four main characters and their relationships with one another.

“I was fascinated by the dynamic between these four characters and how reliant they all are on each other to develop and move forward with their lives,” she says.

“They’re all in a very stagnant place in their lives and through meeting each other, it enables them to grow – I found that very interesting. I was so compelled and moved by this intense female relationship between Bobbi and Frances.

“It’s so beautiful, and one that I resonated with and understood.”

If Conversations With Friends’ predecessor is anything to go by, its stars are facing an imminent catapult to fame. Perhaps none will feel this more so than Alison Oliver: this is her first TV role after recently graduating from The Lir Academy in Dublin, the same drama school attended by Normal People’s Paul Mescal.

“It feels like a big responsibility taking on those characters and this story, but I think once we started rehearsing and started filming, you just become so consumed in your character’s world that you can’t think too far ahead,” she says.

“I was just a huge fan of Sally’s book, first and foremost,” adds Alwyn, discussing his surprising lack of nerves ahead of the programme’s release. “To be invited into her de ella world, and Lenny’s world de ella-I was such a fan of Lenny as a filmmaker beforehand-that was the main thing that I got caught up in.

“Of course, there’s a bit of nerves in following something that’s incredibly loved, and rightly so, but I think it just feels like a privilege, lucky to be a part of it more than anything.”